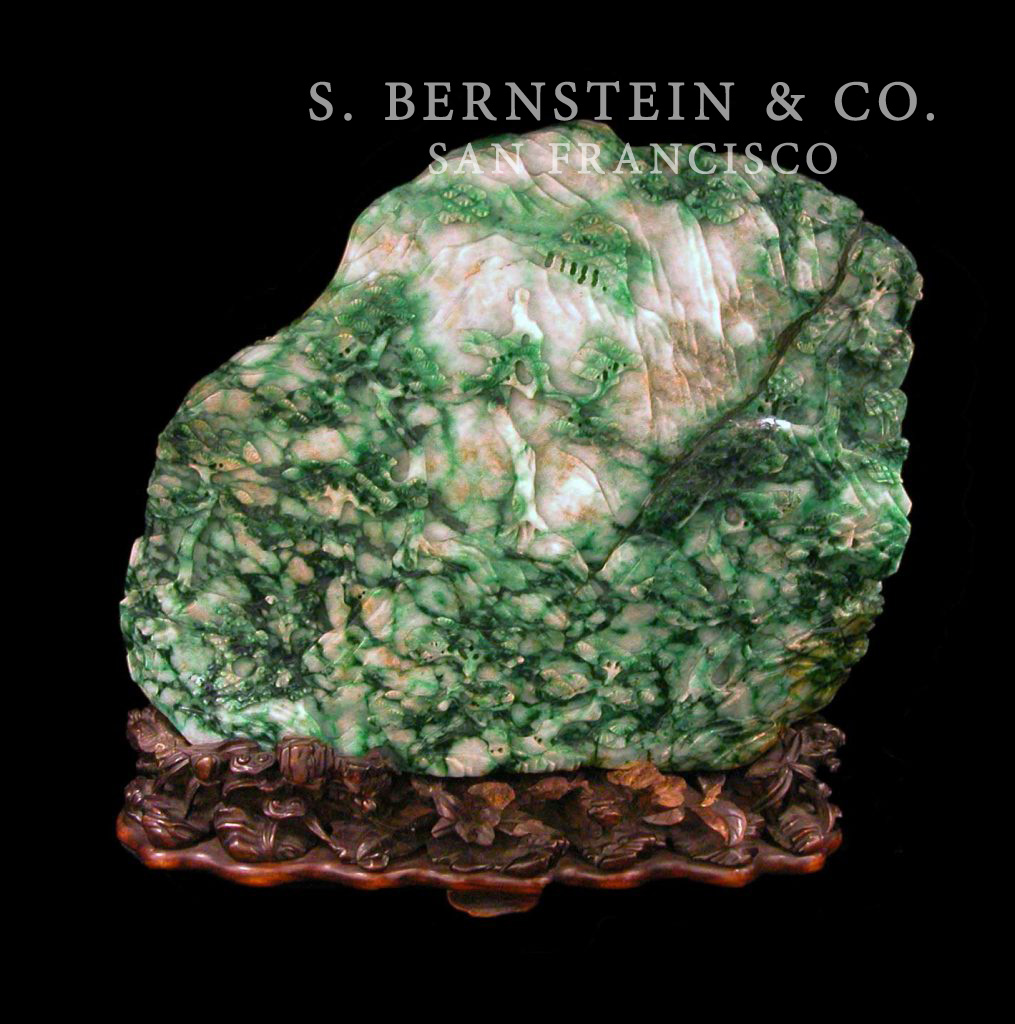 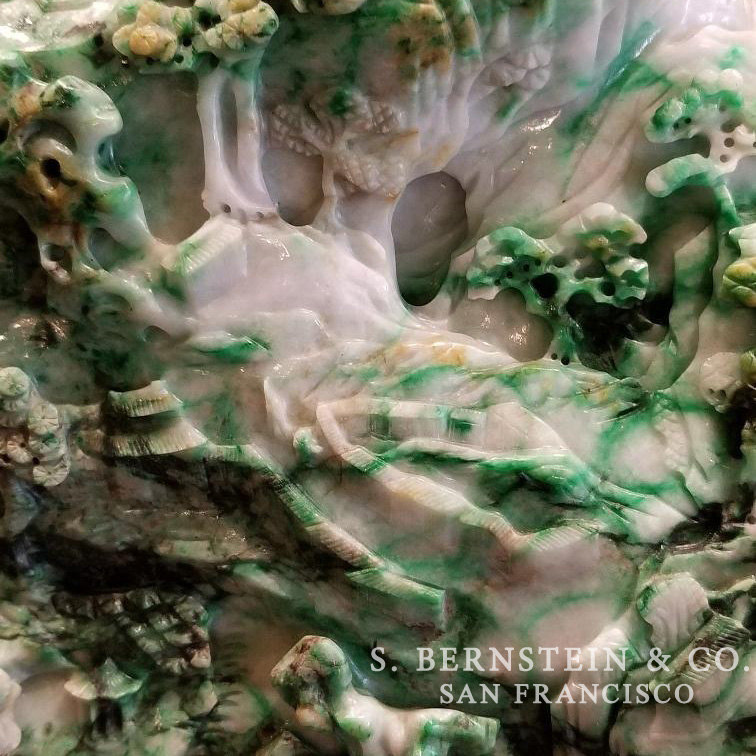 Jade mountains were created as objects of contemplation for the scholar’s studio. Mountains reflect man’s love and awe of nature. Mountain imagery is a central theme in Taoist art; the Immortals themselves lived in the mountains. Furthermore, Chinese folklore is endowed with tales of haunted stones and rocks associated with dragons, devils and gods. Mountains such as the present remarkable example were made as early as the Song dynasty and with the influence of landscape painting gained great popularity among the literary class throughout the Ming and Qing Dynasties.

This boulder depicts Penglai, a mythical land in Chinese mythology, with interspersed pavilions and courts amidst pine and wutong trees. On the reverse an expansive pavilion climbs the length of the mountain, shaded by detailed pines. Three inscriptions, Penglaige (Pengain Pavillion, Ruishidong (Cave of Auspcious Rocks) and Shouxingshi (Rock of Shouxing) identify the respective sites. The material is of an icy white color with spinach green and russet inclusions throughout. In our opinion, the subject matter, workmanship and material suggest a 1780-1820 date for this work of art.

Sir Ellice “Victor” Sassoon, 3rd Baronet, GBE (20 December 1881 – 13 August 1961) was a businessman and hotelier from the Sassoon banking family. He succeeded to the Baronetcy on the death of his father Edward Elias Sassoon in 1924. Married late in life, he had no issue and the Baronetcy became extinct on his death.

Sassoon lived in Shanghai as a wealthy bon vivant who worked tirelessly to protect Western interests in the Orient and helped European Jews survive in the Shanghai Ghetto. Sir Victor walked with the aid of two sticks as the result of injuries in World War I in which he served in the Royal Flying Corps. He founded the Cathay Hotel (now the Peace Hotel) but left under increasing Japanese pressure in 1941. Victor Sassoon was an avid photographer and held extravagant parties at his hotel. He sold his business interests in India and Shanghai in 1948 and transferred the proceeds to the Bahamas. There in 1952 he set up a new enterprise, the E.D. Sassoon Banking Company. During the 1950s Sassoon lived at his home on Cable Beach in Nassau, The Bahamas. Late in life he married his American nurse, “Barnsie”, who remained in Nassau long after Sassoon’s death in the early 1960s. Sir Victor was an avid collector of Oriental art and formed an impressive collection of Chinese Ivories and Jades.

The Gump Family opened an emporium in San Francisco in 1861 supplying furnishings to residences during the Gilded Age . The firm became known as San Francisco’s “gift shop” as the firm expanded into gift wares, silver, stationery and Oriental Art. The store attracted a wealthy clientele of customers from around the world including Barbara Hutton and Doris Duke who relished visits to the famed Gump Jade Room. Gump’s is credited with popularizing the collecting of high quality jade in America. Richard Gump authored “Jade, Stone of Heaven”  published by Doubleday in 1962 which became a standard reference volume for jade collectors.

Kiyohiko Munakata notes, “During the formative period of religious Daoism those who aspired to immortality went to mountains and pursued their spiritual and physical training with the aid of the mystical power of the mountains. Making elixir was a major aim in this pursuit.” See Sacred Mountains in Chinese Art, by Kiyohiko Munakata University of Illinois, Urbana-Champaign. 1991, Page 112

A related example of the Qianlong period and a discussion of the use of natural boulders during the Qianlong period is published in Immortal Images: The Jade Collection of Margaret and Trammell Crow. Alex Kerr. Dallas: Crow Family Interests, 1989. Pages 16-18.

A mountain depicting a landscape with a pavilion is published in Fine Ceramics, Jades and Works of Art. Christie’s London, Tuesday, July 5, 1983. Number 513. Another mountain of large size with three sages observing a waterfall appears as Number 777.