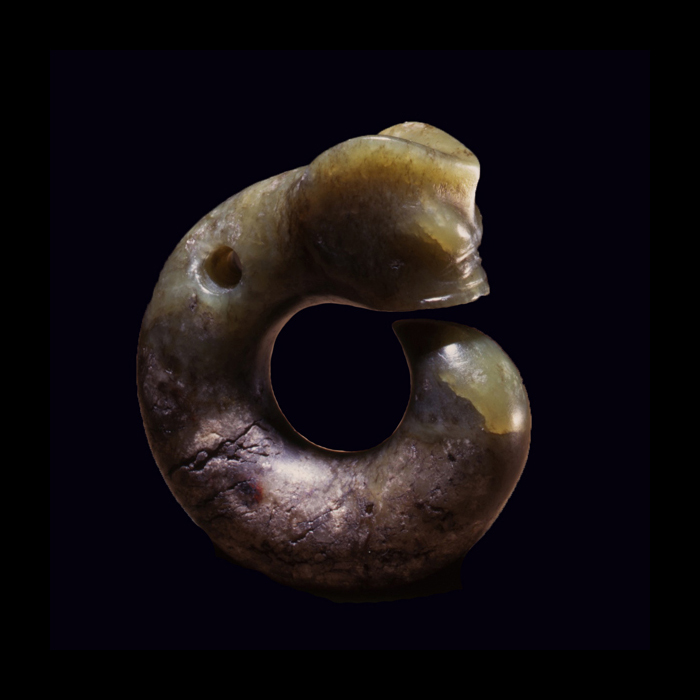 The tradition of jade working began in ancient China during the late Neolithic period (circa 6000-1600 BC) and peaked under the influence of three cultures including the Hongshan culture of Liaoning and eastern Manchuria, the late Dawenkou-Shandong Longshan culture of Shandong and northern Jiangsu, and the Liangzhu culture of Jiangsu, Zhejiang and Shanghai. Each of these jade working cultures can be distinguished by specific stylistic characteristics.

The jade material of Hongshan objects is typically abraded slowly and smoothly creating a gradual rounded form. Arms, legs, tails and other structural features are usually incorporated into the overall form of the object. For example, the tail of this pig-dragon, or zhulong is shaped to a curled, pointed end. Surface details on Hongshan jades are rarely seen, and are usually only carved into the surface to represent necessary parts of the form. The perforations of Hongshan culture jade objects are usually biconical, with an offset at the center that is never polished to a uniform width inside. This type of hole formation is at present only known on Hongshan jades.

As it embodies both stylistic innovation and symbolic meaning, the zhulong is one of the most spectacular finds from the Hongshan culture. Early literary references in China suggest that both the pig and the dragon were considered a source for rain. Current archaeological excavations suggest that the pig-dragon is probably connected symbolically with rites of procreation and fertility. In the open stone altars at Dongshanzui in Kezuo, Liaoning, a portion of a pig-dragon was discovered in situ encircled by a collection of small and large-scale nude female figurines. These mother-goddess types were possibly associated with procreation which attests to a symbolic connection to fertility rites. Therefore, as hunter-gatherer societies settled into agrarian practices, the pig became intimately connected with the success of these societies, and often was incorporated into their rituals and ceremonies.

This zhulong is of dark green jade which is consistent with archaeological excavations of Hongshan sites. Its thick, feline-like body is curled into a tubular circular form. The head is distinguished by two large circular eyes framed by key-hole shaped open loops. Its flat snout and forehead are characterized by grooves of short lines which represent wrinkles. The tail sweeps around to almost meet the mouth and shows evidence of surface wear and effect due to prolonged exposure to water and minerals. At the back of the head, a biconically-bored hole is drilled from both sides to hang the pendant. In our opinion, this physical evidence, combined with Neolithic technical skill, and soft polish are consistent with Hongshan Neolithic culture workmanship.

See “Dragons, Masks, Axes and Blades from Four Newly-documented Jade-producing Cultures of Ancient China” Elizabeth Childs-Johnson. Orientations. April, 1988. Pages 30-41 for a discussion of the zhulong type. Similar zhulong are illustrated in figs 2 and. 3. Note the Shang pictographs of dragons in oracle bone inscriptions in figure 6 as well as a pig-dragon of the same period in the Hongshan style.

For a drawing of the zhulong as an example of an established Neolithic jade form, see Jade Carving in Chinese Archaeology: Volume One. Yeung Kin-Fong. Hong Kong: The Chinese University of Hong Kong, 1987. Plate XXV, number 11.

A zhulong which exhibits a similar tail is illustrated in Chinese Jade From The Neolithic To The Qing. Jessica Rawson. London: British Museum Press, 1995. Page 117, plate 1:5.

See “Five Chinese Jade Figures: A Study of the Development of Sculptural Form in Hongshan Neolithic Jade Working” for diagrams of hole types found in Neolithic jades as well as a discussion of Hongshan jade types. Angus Forsyth. Orientations. May, 1990. Pages 54-63.

A zhulong of the same period is pictured in the context of a Hongshan tomb. See Wenwu [Cultural Relics] No. 8, 1986. Color plates 1 and 2.

See “Some Notes on the Pig in Early Chinese Myths and Art,” for further discussion of the evolution of this jade form with reference to historical literature. Jao Tsung-i. Orientations. December, 1988. Pages 39-41.