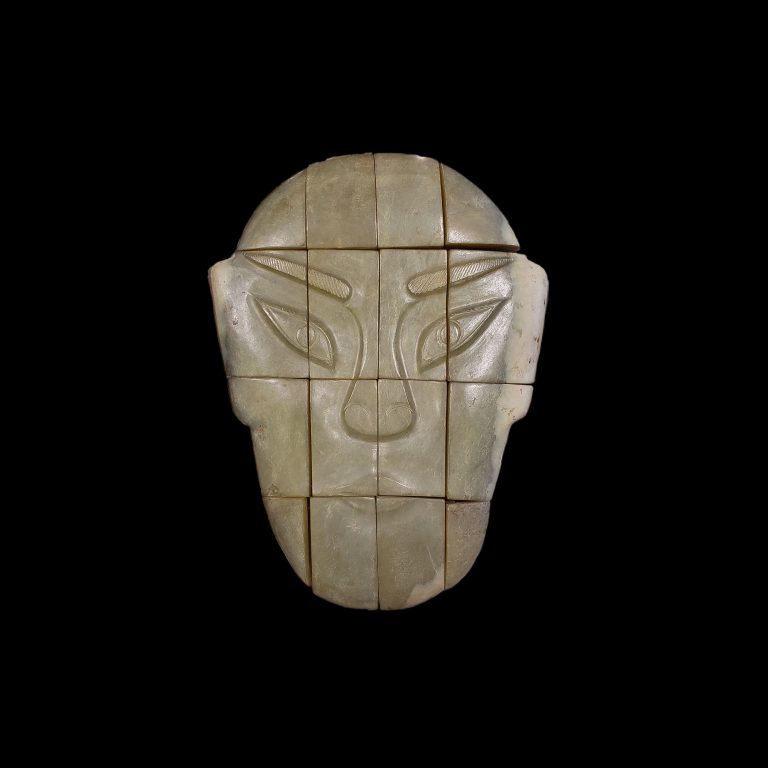 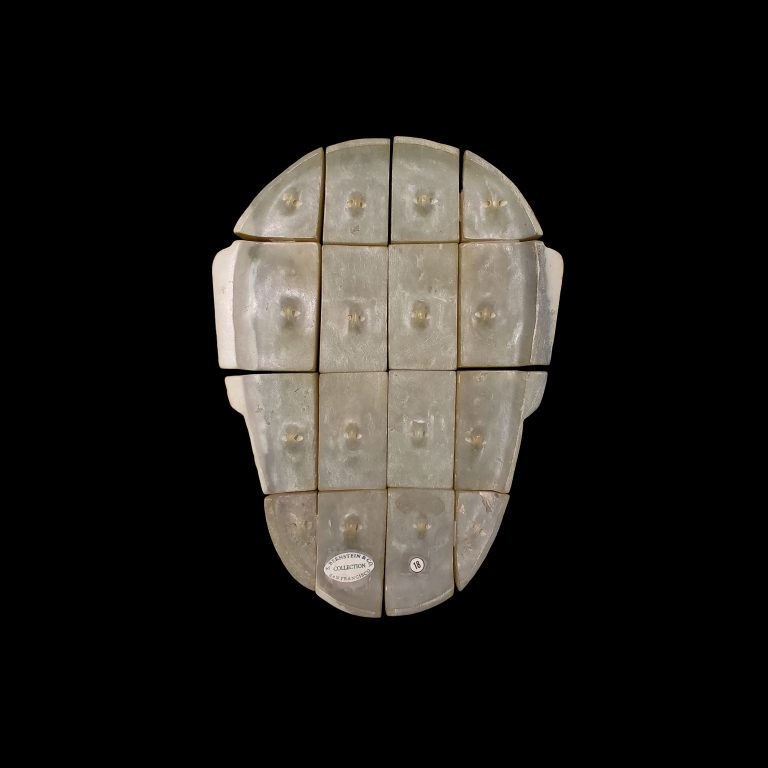 This rare sixteen-piece facemask is rendered in relief with human features. The characteristics of the small, narrow face are quite delicate and possibly represent those of a female. On the reverse, each piece is carved with a straight burrow hole, which is pierced through a pinched, raised mounting point. The mask shows physical evidence of burial in the random patterns of sandy-brown surface alteration along the rounded edges, front and back. This surface alteration is the result of decomposition in the tomb and similar random patterns are found on metal facemasks of the period.

Masks were part of the elaborate burial regalia of the Liao aristocracy (see Chinese Art From Distant Centuries, 1993, plate 19). A considerable number of Liao tombs have been excavated in recent years. Only in a limited number of them have masks been found, which would suggest that the more ceremonial burial customs were limited to imperial clansmen. Specifically, the tombs discovered in the past have been designed for high-ranking couples.

The pale olive-green colored stone is peculiar to the North Eastern area of the Liao Dynasty. Although considered to be jade by the Liao culture, the material of this mask may be bowenite, which was frequently used for carvings at this time. Masks of this type would have been created strictly for burial, and the simple carving style is evidence of this purpose. During the Han dynasty there was a belief that jade possessed a magical property, which helped to preserve the body. The Liao people adopted these Chinese practices and rituals, and this was apparently the origin for this burial mask of jade.

Although jade burial masks are rare, stylistically, this can be compared to metal examples of the same period. The distinctive material of the mask and the physical condition provide additional clues, which would support a Liao date.

In our opinion, the material, physical characteristics, style and workmanship indicate a Liao period date for this mask.

Formerly in the Collection of Siu Cho Fong

A similar mask of a male handled by S. Bernstein & Co. is presently in an American Collection. The male mask and the present female mask were exhibited in the Asian Art Museum of San Francisco in 1994.

This mask is similar to the two bronze masks of the same period in the Avery Brundage Collection, (B60 B659 and B64 B16) in The Asian Art Museum, San Francisco.

Gold burial masks illustrated in situ in the article ‘The Liao Dynasty Tomb of a Prince and Princess of the Chen Kingdom.’ Orientations: October 1991. Pages 53-61.

A copper burial mask of the same period is illustrated in The Ernest Erickson Collection in Swedish Museums. Jan Wirgin, ed. Stockholm: The Museum of Far Eastern Antiquities, 1989. Page 58, plate 56.