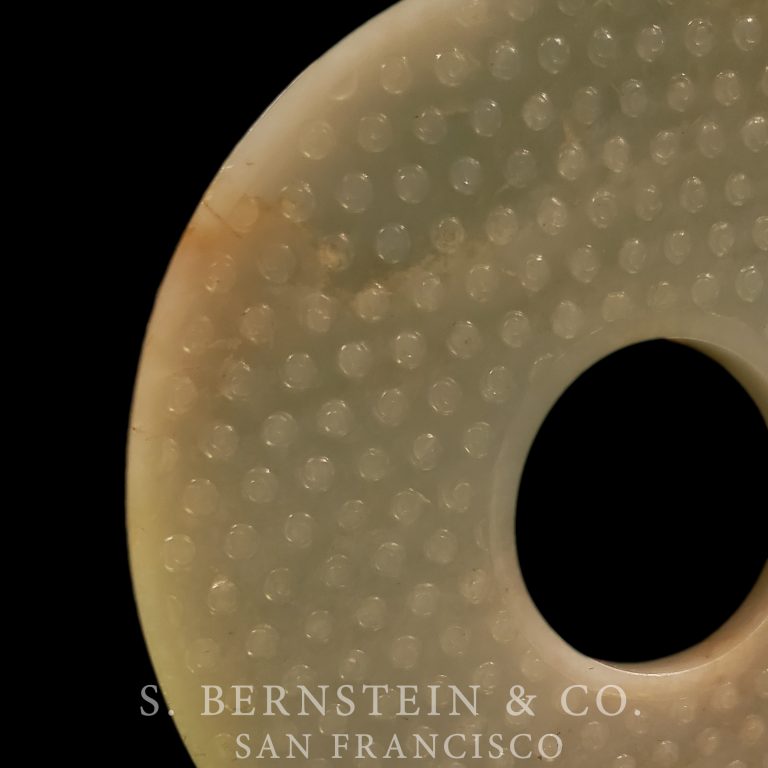 The jade material of this bi disc is of a pale celadon coloration with subtle areas of russet running through it. The face of the piece is covered with an ordered array of raised spirals, incised with a thinner spiral band. This pattern is referred to as the rice grain pattern, which was developed in the Han dynasty. According to Wills, the rice grain pattern found on bi discs is thought of as “formal representations of neatly arranged rows of seeds. The curled variety is presumed to show the seeds sprouting through the earth, and thus to symbolize fertility.” According to Cheng Chia-hua of the National Palace Museum, one theory holds that the precursor to the bi disc was, “a kind of stone spinning-wheel or jade millstone…Such an agricultural origin is more strongly hinted at in the gu-bi (grain patterned disc) with its grain pattern decor.”

The outer edge of the disc and the center perforation is framed by a thin flat raised border. The overall polish of the piece is smooth and matte, with some evidence of prolonged burial. In our opinion, the proportions of hole to outer edge, flattened borders, and characteristic spiral forms on the surface make this jade bi disc an excellent example of Han Dynasty workmanship.

For an overview on bi discs during the period see Chinese Jade From the Neolithic to the Qing. Jessica Rawson. London: British Museum Press, 1995. Pages 246-251.

For a discussion of the sprouting grain pattern see Chinese Jades From the Collection of the Seattle Art Museum. James C.Y. Watt. Seattle: Seattle Art Museum, 1989. Page 45. A sword pommel with similar raised comma pattern is illustrated in detail, plate 24.