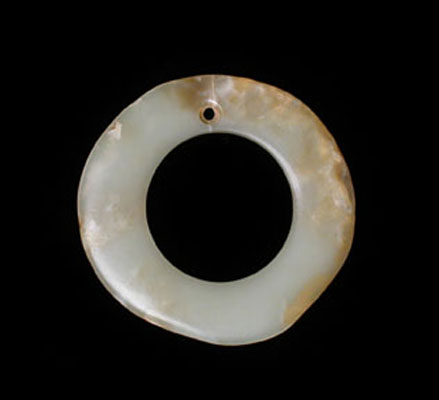 This bi disc is perhaps the single most enduring form in Chinese art.  Even though different cultures attributed different meanings to the disc, scholars believe the motif has its origin in personal ornaments of the Neolithic cultures in the Northeastern China (today’s Inner Mongolia and Liaoning province).  Earrings in the form of a slit ring (jue) have been excavated at Xinglungwa and Chahai sites dated as early as 6000-5000BC.  In the sixth to third millennia BC, jade working flourished in that area under the Hongshan culture.  Recent archaeological evidence indicates that the use of jade spread south as a result of both direct and indirect contacts with this culture.

Jade served an important role in Hongshan culture as jade objects constituted the sole status burial material, a characteristic unknown in other Neolithic cultures.  The incidence of jade as tomb furnishings suggest that members of the Hongshan community were differentiated by status and wealth.  Working with jade was an extremely slow and laborious process.  In a Neolithic society, such technologically and artistically sophisticated objects must have served as expressions of prestige and authority.  From the complexity of Hongshan rituals and artifacts, scholars have concluded that this culture had developed a highly stratified society, with elites, division of labor, and advanced administration over resources.  Those early elites would evolve in later periods into village chiefs, regional kings, and eventually, emperors.

Recent archaeological excavations have brought extensive knowledge of Neolithic cultures, which can be differentiated into specific regions and time periods.  Given that jade assumes a color specific to the region where it is found, and because migrations during Neolithic times were rare, jade works can often be assigned to specific cultures based partly on the coloration of the material from which they are worked.  Many examples of jade works excavated from sites in this region are pale, yellowish green in color.

Other predominant colors of jade in this region are dark opaque green, beige, yellow  and cloudy white with black inclusions.  Thus, based on the coloration, one can ascertain the region from which the jade was found.

However, it is also of primary importance to consider how the jade was worked, in order to attribute it to a specific culture.  The thin profile of this somewhat oval bi disc reveals the glassy translucency of the jade.  At its thickest point, it is approximately 0.3 cm, which is consistent with other excavated examples.  Also typical of Hongshan jades, this ring is elliptical in cross section.  The slightly beveled hole is smoothed to a gently sloping profile, another characteristic of Hongshan jades.  The jade is pale yellow in color with white and subtle russet inclusions.  There is a narrow suspension hole worked from one side at the top of the disc.

In our opinion, this is one of the earliest examples of the bi disc in form, style of workmanship, and coloration of material, from the prolific jade working Hongshan culture.

A similar Hongshan disc is illustrated in The National Palace Museum Monthly of Chinese Art, No. 129, December 1993, page 52.

A grayish-white oval bracelet, similar in thickness and in form, and from the Hongshan culture, is illustrated in Jades from China. Angus Forsyth and Brian McElney. Bath: Museum of East Asian Art, 1994. Page 125, plate 29.