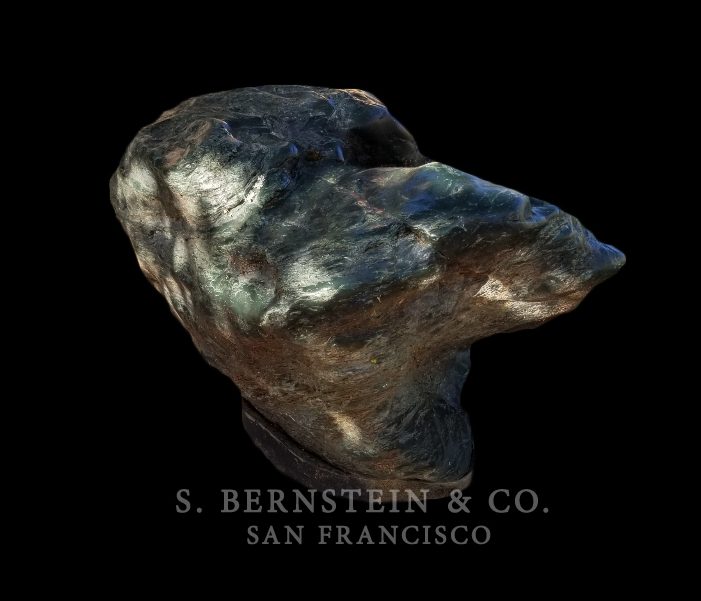 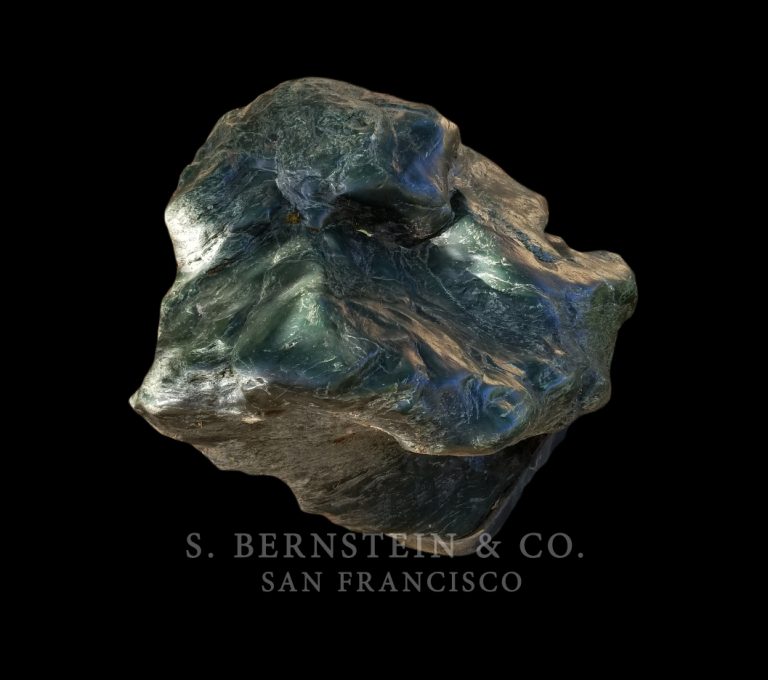 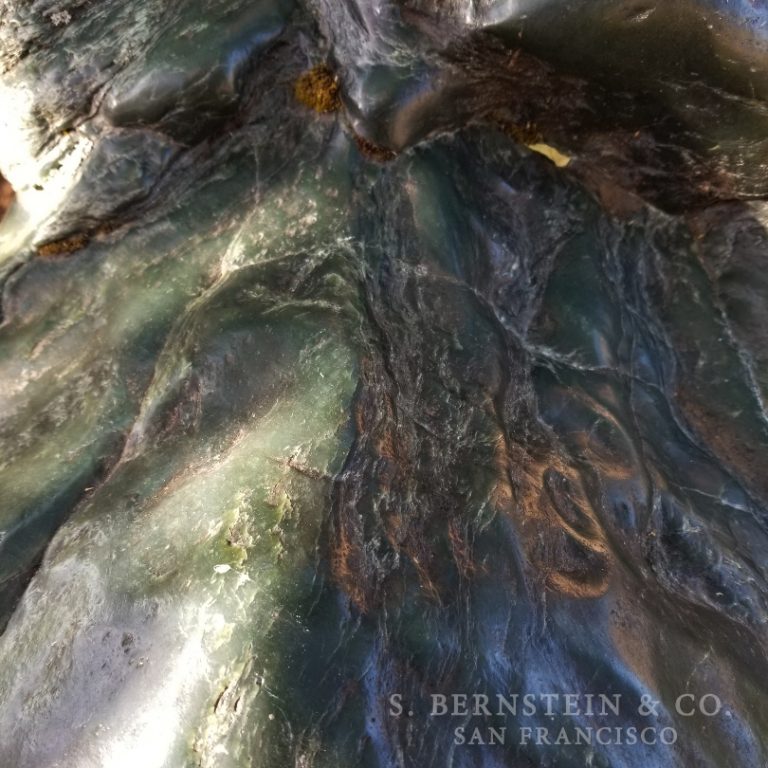 The natural shape of this ocean worn boulder of spinach green nephrite jade suggests an impressionistic head of a dragon. The boulder was discovered by Don Wobber at Jade Cove on the Monterey Coast in 1990. Mr. Wobber, a diver and famous jade sculptor floated the boulder from the ocean floor and retained it in his personal collection until 1995.

This natural spinach green nephrite jade boulder of weighs approximately three hundred to four hundred pounds and represents jade in its natural resplendent state. The irregular surface was shaped and polished by exposure to natural elements under the sea. The natural shape suggests a massive head of a dragon appearing to emerge from the stone-the eyes, extended snout, and flaring nostrils are easily discernible- but the mysterious shape of this boulder tempts the viewer to seek out other hidden forms. In our opinion, this boulder is a fine example of nephrite jade from the collection of the Jade artist and diver Don Wobber.

Don Wobber (d. 2014) was a California jade artist who dedicated his life to the retrieval and sculpture of nephrite from the Pacific waters off the Big Sur coast. His frequent dives in Jade Cove, located sixty miles south of the Monterey peninsula, supplied him with jade boulders of great beauty and diversity. In 1971, Wobber and three other divers received national media attention when the team recovered a 9,000-pound boulder named “Nephripod.” The expedition is chronicled in Don Wobber’s own account, Jade Beneath the Sea: A Diving Adventure. An experienced diver, Wobber actively explored the underwater landscape of California for over forty years. He worked and participated in exhibitions, concentrated mostly in and around the Pacific Grove area, yet he gained national acclaim from authorities such as National Geographic, which noted that he was “among the best of the world’s contemporary jade sculptors.”

As in the Chinese jade working tradition, Wobber believed that each stone dictated the subjects and shapes of his works of art. His respect for the jade material is evident in his sculptures, which preserve the traces of natural wear by the sea. Mr. Wobber allowed nature to persevere; only minimally altering the shape and polish of the jade material.

Mr. Wobber is the author of Jade Beneath the Sea- A Diving Adventure. He also produced three short subject films about his art and exploration for jade on the Big Sur Coast of Northern California. These include The Touchstone, Jade Sculptor and The Jade Cave. Mr. Wobber died in 2014 at his home-studio in Pacific Grove, California.

A personal account of the discovery of jade boulders is recounted in Jade Beneath the Sea- A Diving Adventure, Don Wobber, The Boxwood Press, 1975.

A personal account of Don Wobber’s artwork may be found in The Emperors Jade Suit. S. Bernstein.

A personal account of the discovery of jade boulders is recounted in Jade Beneath the Sea- A Diving Adventure, Don Wobber, The Boxwood Press, 1975.