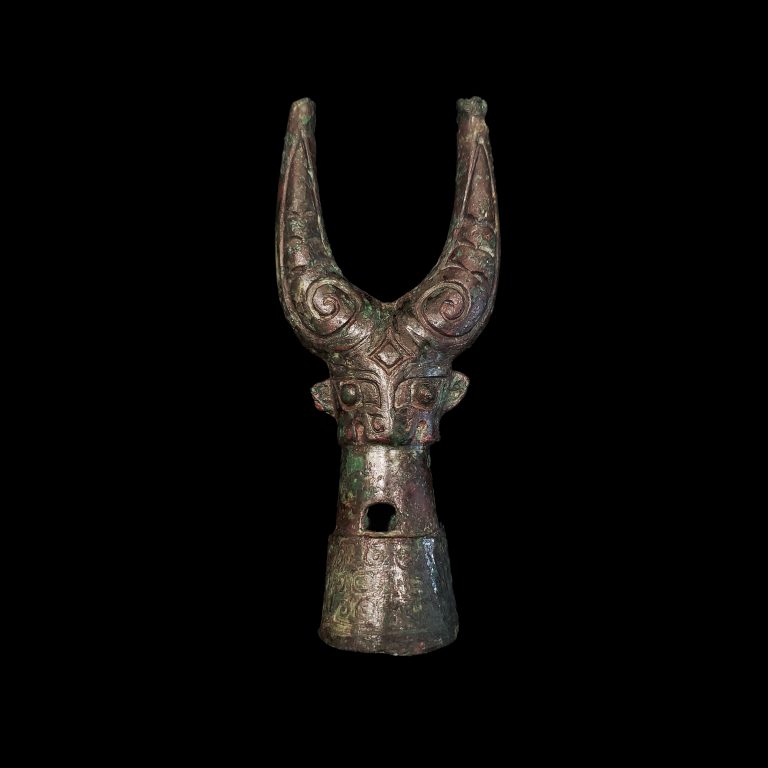 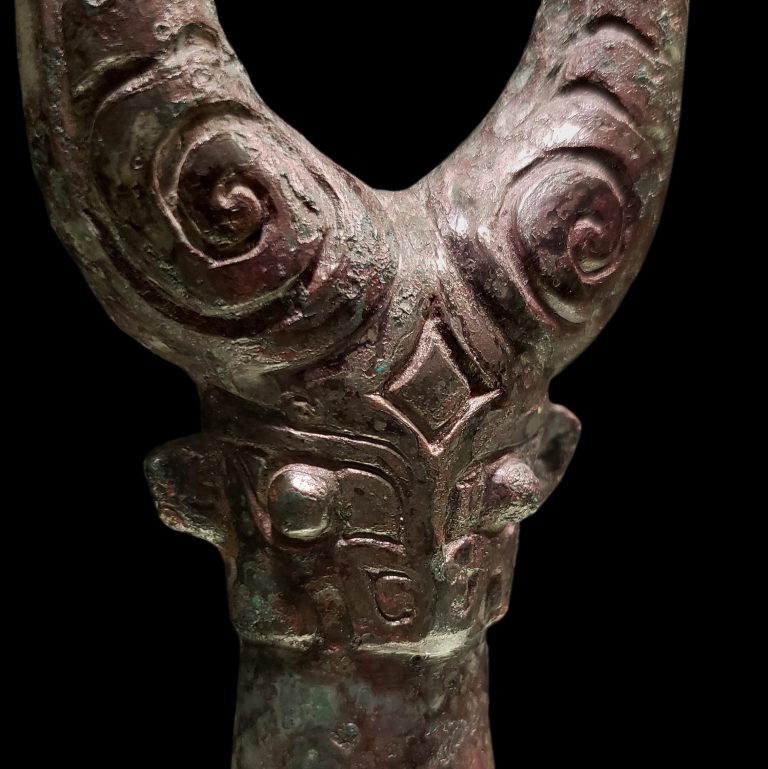 The prototype for this bronze finial is a two-pronged, stone agricultural implement known as a lei which was used during the Neolithic period for digging holes or ditches. By the late Shang period, the staff-finial had lost its utilitarian function and evolved into a purely ritualistic emblem of power and wealth. The Bronze Age is characterized by a sharply divided class system with the wealthy aristocracy concentrated in the cultural centers of China. Archaeological finds in Anyang, the Shang capital after about 1300 BC, indicate a luxurious lifestyle that is reflected in the buildings, bronze artifacts and elaborately furnished burials.

This ornament relates to a similar example excavated from Anyang in terms of subject matter and decoration. The cast decoration on this well preserved staff-finial intermingles human and animal features. Both sides depict a human face with elongated sculpted horns that are deeply incised with spirals, and below a monster mask encircles the base. There is a hollow socket for the insertion of a wooden handle. The crisply cast designs are consistent with other ritual objects of the period that were cast using the highly efficient piece-mold method.

In our opinion this staff finial is an excellent example of late Shang period workmanship based upon its subject matter and artistic metalworking technique.

A bronze finial fragment of an ox head with horns found at Anyang is illustrated in Bulletin of the Museum of Far Eastern Antiquities, no. 6. Stockholm, 1934. Page 101, plate V, fig. 3.

A similar finial of the same period with animal mask is shown in The Seligman Collection of Oriental Art, volume 1. Howard Hansford. London and Bradford: Humphries and Company, 1957. Plate 13, A17.

For a complete discussion of the animal mask in Shang China see The Problem of Meaning in Early Chinese Ritual Bronzes: Colloquies on Art & Archaeology in Asia, no. 15. Roderick Whitfield, ed. London: School of Oriental and African Studies, University of London, 1993. Pages 102-118