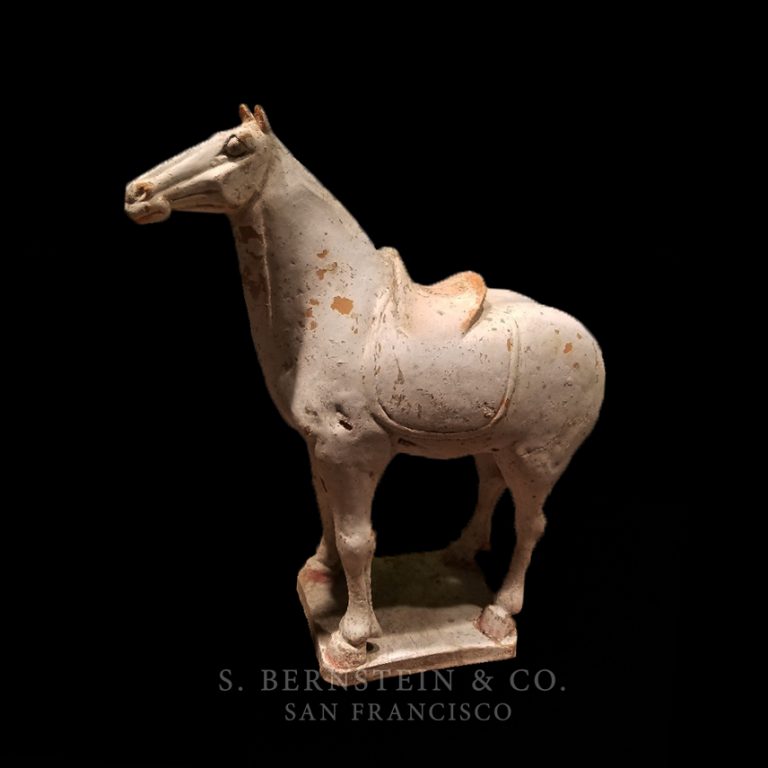 STANDING FIGURE OF A HORSE

The vigorous, proud stance of this horse is symbolic of the luxurious and exotic taste of the Tang period. Indispensable in war, horses were of great strategic importance to the rulers of Tang China. The exclusive domain of state and aristocracy, horses were received as diplomatic gifts or imported and bartered on the open market for fantastic sums. Forbidden as mounts for merchants and artisans, most were stabled for government use, while the very finest were kept for the Emperor and other members of court. There, they were ridden in hunting parties, polo matches, and even performed as dancing entertainers at royal banquets. This lively, proud horse exhibits the awe-inspiring qualities of these imperial steeds. It stands attentive, with head slightly turned, and ears pricked-up. The muscular cream body of the animal is firmly planted on a rectangular base.

The surface texture and appearance of this regal animal are inherent to the material used and firing techniques of the period. Hairline crackling under the surface of the glaze occurred during firing and was caused by moisture which had been absorbed by the porous clay. Surface cracks and small craters were also formed at the time of firing. A channel runs along the center neck of the animal and probably held a flowing mane of horsehair. Also, a socket on the rump originally would have held either a full or a tied and docked tail typical of Tang horses.

In our opinion, the workmanship, naturalistic rendering, style and physical condition suggest a Tang Dynasty date for this work of art.

Formerly in the Collection of Marcella Gump, of the Gump Family of San Francisco

Two samples taken are consistent with the suggested period of manufacture.

A related example of a Tang horse in a similar pose without the saddle is pictured in Chinese Ceramics: Han-Tang Dynasty. pg. 255. Similar green splashing is shown on pl. 227 and 240.

A similar example of a horse with a groove running down the neck for a horsehair mane and a socket for a tail, with a modern replacement, is illustrated in Bronze, Clay and Stone: Chinese Art in the C.C. Wang Family Collection. Annette L. Juliano. Seattle: University of Washington Press, 1988. pl. 64.