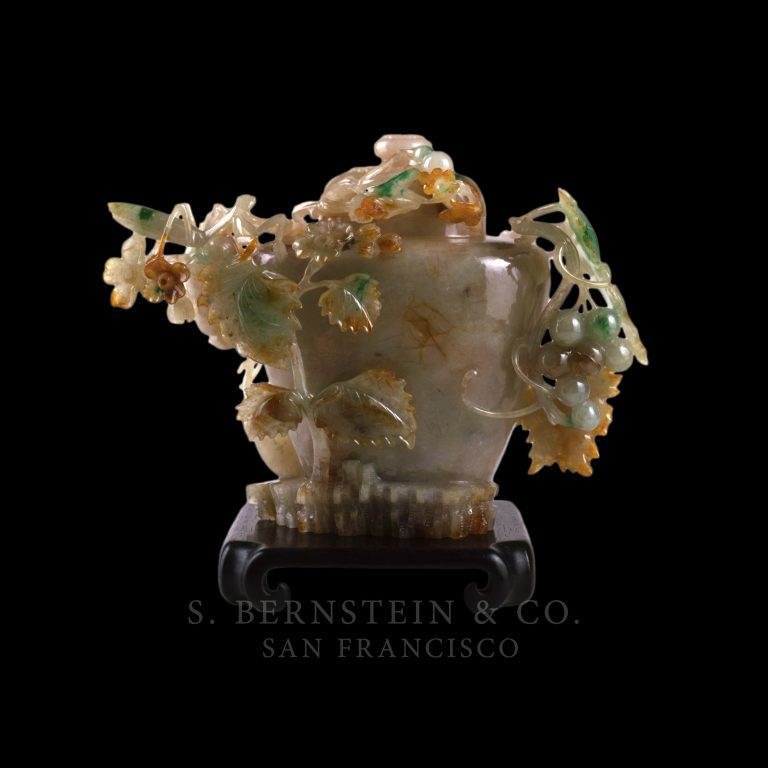 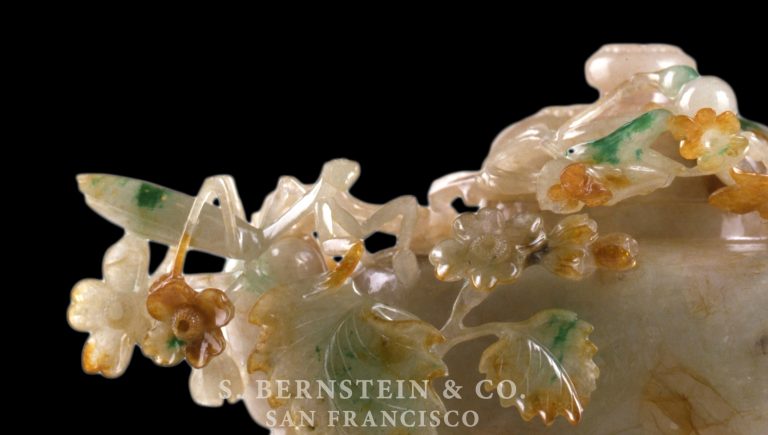 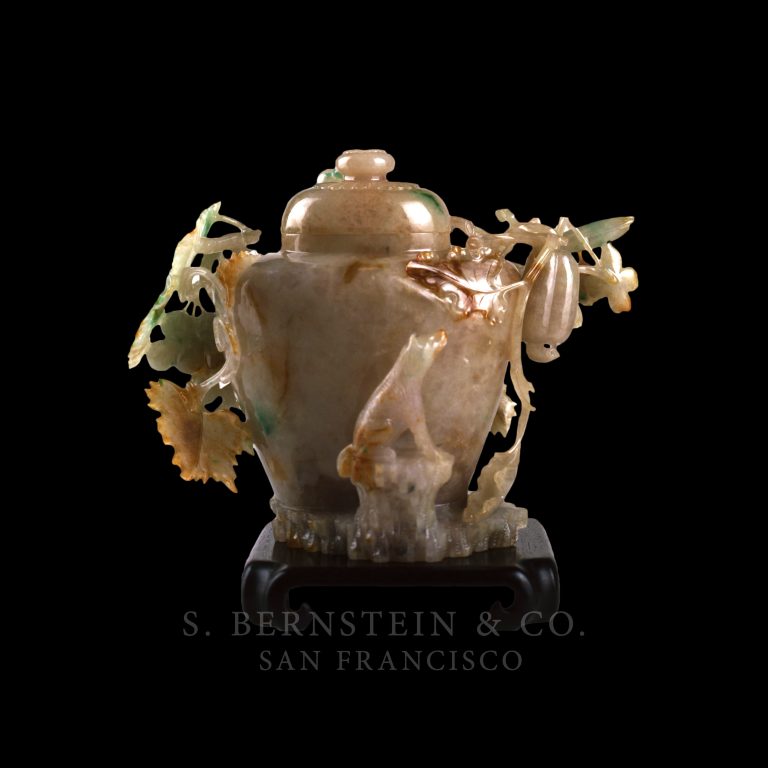 By surrounding themselves with auspicious symbols, the Chinese believed that their wishes would come true. The symbols were often represented by groupings of seemingly unrelated objects that shared the same sounds as prevalent auspicious sayings. These pictorial puns or rebuses were found in abundance in the decorative arts during this period. Frequently intended to grace the scholar’s studio or as a gift on a special occasion, the objects conveyed specific blessings to the beholder.

The present covered vase has a rounded shoulder and tapers towards the base, resting on a rockery. The front of the vase is adorned with grape leaves, fruit and flowers with a praying mantis nestled in the foliage. The rear of the vase features a carving of a wolf figure. In Chinese art the wolf (lang 浪) is the symbol of cupidity and rapaciousness, while the praying mantis (tanglang 螳螂) symbolizes pertinacity. Grapes and grape vines are a rebus for fertility and convey the wish, “May you have many sons.” The material is a crystalline white jadeite jade with areas of apple green and russet inclusions. This naturalistic and foliate motif reflects the Chinese approach and the artist’s mastery in utilizing the natural qualities of this jade in the design.

In our opinion, the naturalistic design and realistic attention to botanical elements and use of the natural material make this covered vase an excellent example of the later Qing period.

Formerly in the Collection of Sir Isaac and Lady Wolfson, London.

Sir Isaac Wolfson (September 17, 1897- June 20, 1991) was a Scottish businessman and philanthropist. As a young man Wolfson was brilliant at mathematics but could not afford to train as an accountant so he became a salesman for his father, a local cabinetmaker and Jewish immigrant from Poland. He got his start in business selling clocks, mirrors and upholstery in London in the 1920s before being hired at Great Universal Stores, G.U.S. or Gussie’s, a mail-order catalogue business.

Wolfson was a brilliant financier and this allowed him to gradually gain ownership of G.U.S. and grow it into a very successful business. He was married in 1926 to Edith Specterman. Known for his philanthropy, he created the Wolfson Foundation in 1955 supporting excellence in the fields of science and medicine, health, education and the arts & humanities. It once contributed $280,000 to buy a Goya painting of the Duke of Wellington back from an American collector and keep it in England. Other examples of its generosity included a chair in criminology at Cambridge and one in metallurgy at Oxford, not to mention the Wolfson School of Nursing and the Wolfson Institute at London Postgraduate Medical School.

Sir Isaac’s philanthropic works in Israel included contributing most of the cost of a building for the Chief Rabbinate in Jerusalem. And in 1958 he bought the Haifa oil refinery from the Shell and British Petroleum companies. His chief motive, it was widely thought at the time, was not profit — a doubtful prospect — but maintenance of Israel’s petroleum supply in the face of Arab boycotts. In 1962, he received a baronetcy in the Queen’s New Year’s Honours list, becoming Sir Isaac Wolfson of St. Marylebone.