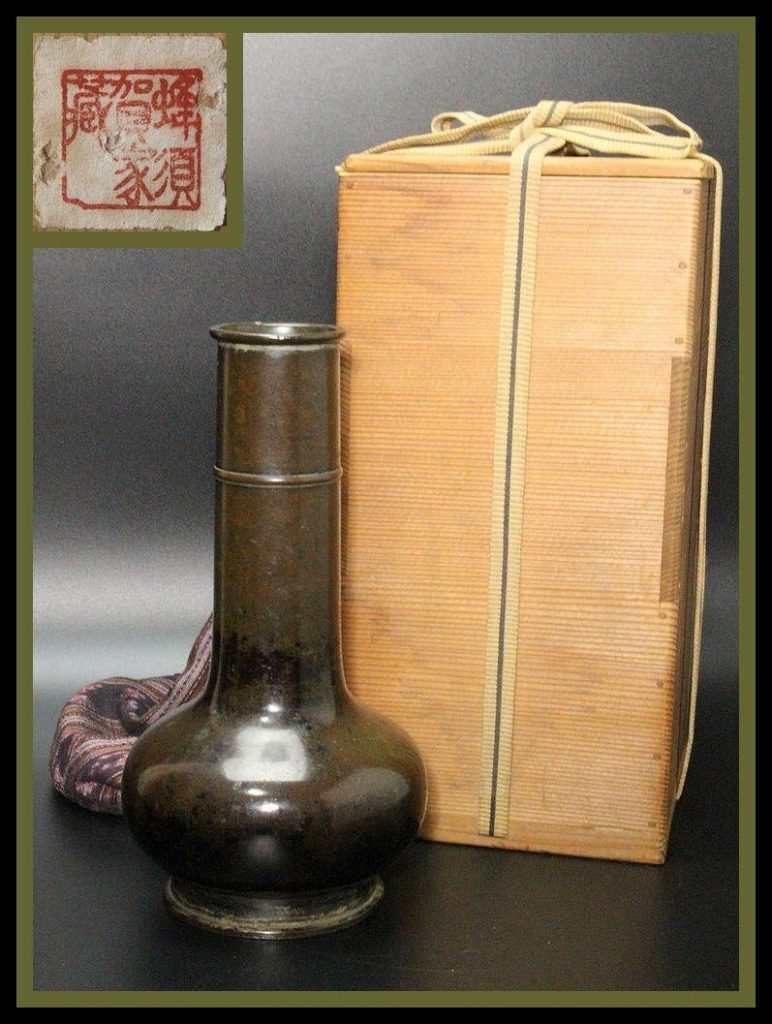 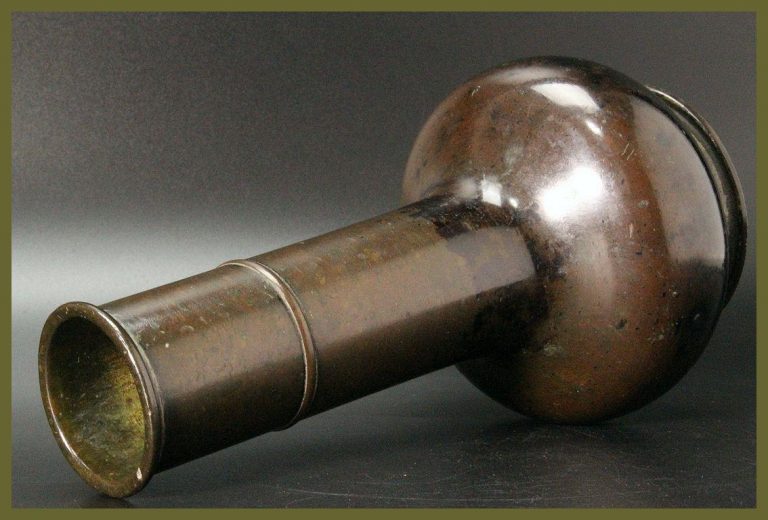 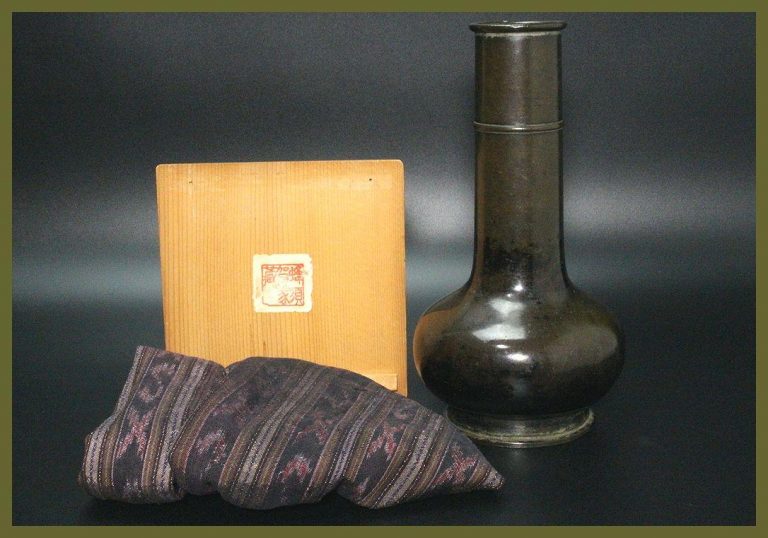 From the warehouse (Kura) of Hachisuka clan

This elegantly shaped bronze flower container epitomizes the grandeur of the Muromachi period of Japanese art. The Muromachi period, (1336-1573) while convulsed with war among neighboring clans also witnessed the emergence of great art. Noh Theater, Japanese gardens, flower arrangement, ink painting, shoin-zukuri architecture and the tea ceremony flourished during this period. Wealthy and powerful samurai and political elites vied to own the rarest examples of art.

This bronze example, which played a role in flower arranging during the period, shows a delicate yet bold understated shape. The elongated neck shows a single band, which is a unique characteristic of Muromachi period bronze flower vessels. This object was once part of the Hachisuka clan, which served the Shogun Toyotomi Hideyoshi. There is a seal of Hachisuka clan on the inner lid of the wooden box. It is written that this bronze vase was in the warehouse (Kura) of Hachisuka clan. (Property of the Hachisuka family). In our opinion, the subject matter, material and workmanship suggest a Muromachi period date for this work of art.

Formerly in the Hachisuka clan Collection

For an interesting account of the Muromachi period and the evolution of the collecting aesthetic see Yoshimasa and the Silver Pavilion, The Creation of the Soul of Japan. Donald Keene. Columbia University Press. New York. 2003

The Hachisuka clan (蜂須賀氏 Hachisuka-shi) are descendants of Emperor Seiwa (850-880) and are a branch of the Ashikaga clan and the Shiba clan (Seiwa Genji). Ashikaga Ieuji (13th century), son of Ashikaga Yasuuji, was the first who adopted the name of Shiba. The Shiba were shugo(governors) of Echizen, Owari and other provinces, and were during the Ashikaga shogunate one of three families (Shiba, Hosokawa and Hatakeyama) from which the Kyoto-kanryo (prime minister of the shogun) could be chosen. Shiba Masaaki, the descendant of Shiba Takatsune (+ 1367), established himself in Hachisuka, near Kiso river at the border of Owari and Mino provinces, whence he took the name Hachisuka.

In the 16th century, the Hachisuka clan came to prominence thanks to its head, Hachisuka Koroku. His uncle held Hachisuka castle and he lived first in Miyaushiro castle which was his mother’s family home. Koroku served the Oda clan, being instrumental in several of the early victories of Oda Nobunaga. He later went on to serve under Toyotomi Hideyoshi.

His son, Iemasa, received Tokushima Domain as a new landholding from Hideyoshi. From then until the end of the Edo period, the Hachisuka were the lords of Tokushima. They would be one of the few clans to retain the same landholding from the start of the Edo period to its conclusion. They also managed to retain a constant income rating of 256,000 koku. In the late Edo period, the clan came into national focus because of the contemporary head, Hachisuka Narihiro, who was a son of the 11th shogun, Ienari. The clan sided with the Kyoto government during the Boshin War and contributed troops to the fight in the north, as well as to security duties in Edo (Tokyo).