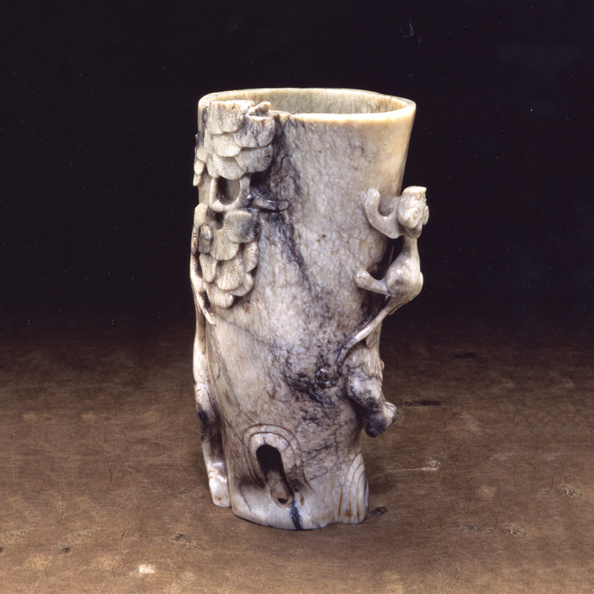 Objects integral to the arts of painting, calligraphy and writing were highly valued by Ming period scholars for their aesthetic qualities. These literati took pride in their intellectual and artistic activities as well as the tools used to complete them. Thus, these objects were not strictly functional, but were meant to be consistent with the owner’s philosophy of life and reflect his refined taste and cultivation. The naturalistic motif of this brush holder was intended to evoke an idealized environment, thereby transporting the scholar to another realm where he would be in complete harmony with nature. It was believed that jade objects, such as this, created an atmosphere in the scholar’s studio conducive to enlightenment – the ultimate goal of Ming Dynasty scholars.

The pine tree, or evergreen, is symbolic of longevity since it stays green throughout the year. A naturalistic pine tree and boughs have been incorporated into the pine trunk design of this brush holder. Stylized knots in the wood are indicated by deep incised ellipses while a deeply indented foot resembles a hollowed tree trunk. In keeping with the natural form, a chi dragon in high relief forms a handle on the side of the vessel. Finely incised, geometric, stylized rocks accentuate the surface of the container.

The artist of this piece has masterfully incorporated the natural variations of color in the jade material into the overall design of the brush holder. The variation from light whitish-grey to black is used to full effect in this vessel. The body and dragon are mostly of the lightest grey while the pine tree and rocks are of darker grey and black accents. It is particularly apparent that the artist has retained the integrity of the stone, adapting its natural variations to a design appropriate to the material. In our opinion, the use of material, naturalistic form, and refined style make this an excellent example of a Late Ming scholar’s brush holder.

Compare the deep relief of the pine trees with those on an 18th century example found in Three Dynasties of Jade. Joan M. Hartman. Indianapolis Museum of Art, 1971. Page 20, plate 27.

See a more stylized pine decoration on a brush holder in the collection of the Fogg Art Museum and published in Chinese Jades from Han to Ch’ing. James Watt. New York, Asia Society, 1980. Page 131, plate 108.

A brush holder, also from the late Ming period, carved from bamboo in the form of a pine trunk is shown in Bamboo Carving of China. Wang Shixiang and Wan-go Weng. New York: China Institute in America, 1983. Page 66-67. Plate 5.