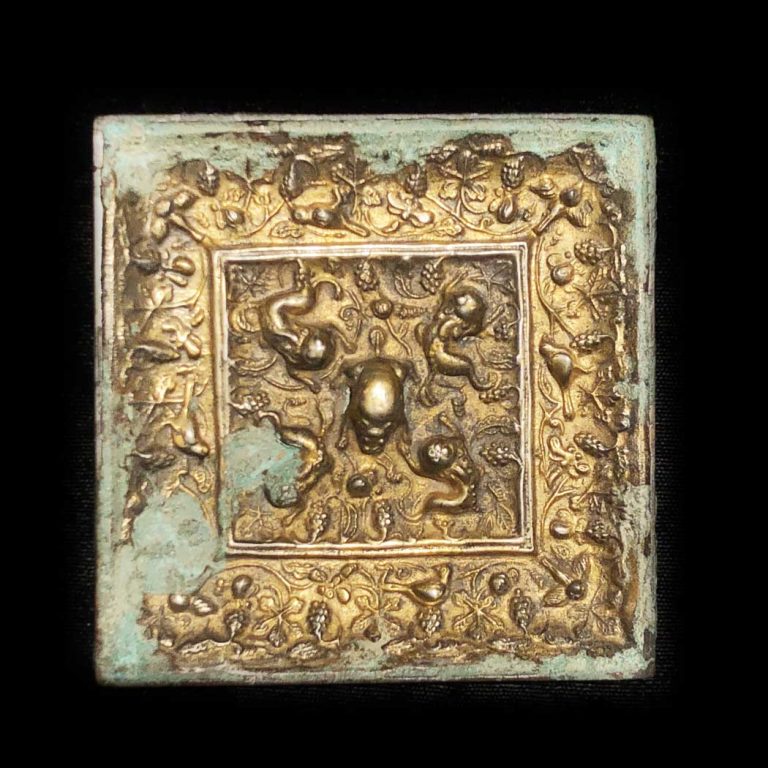 This mirror reflects the artistic creativity that characterizes the elegant and prosperous Tang period.  The art of mirror-making in China originates as early as the Warring States and Han periods (480 BC-AD 220), and achieved its pinnacle during the Tang dynasty.

This crisply cast square mirror depicts the animal and grapevine pattern which was a popular motif of the period.  Bunker and Rawson suggest the pattern was derived from the vine scrolls first seen in China on metalwork of the Fifth century, found near Datong in Shanxi Province.  There is slight alteration to the surface resulting from prolonged burial and exposure to soil mineral elements.

Square mirrors, of which this is a superb example, are rare in the Tang period.  In the eighth century, increasing insecurity along the frontiers and internal distress interrupted the importation and mining of precious metals, leading in the year 756 to an edict prohibiting production of objects with gilded or inlaid decoration.  The edict marked a decline in precious metalworking which increased the appreciation for metal objects being produced.  In our opinion, the design and intricate workmanship of this mirror exemplify outstanding metalwork of the Tang dynasty.

The metalwork of the Tang is discussed in “Tang Dynasty Gold and Silver,” Clarence W. Kelly, in Orientations, March 1985, Pgs. 10-17.

Subject to prior sale