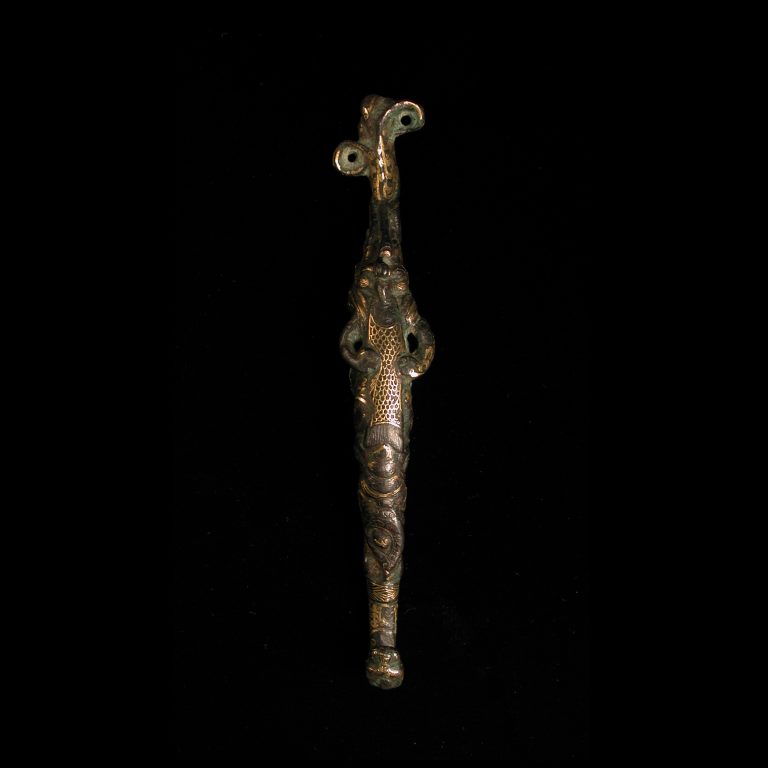 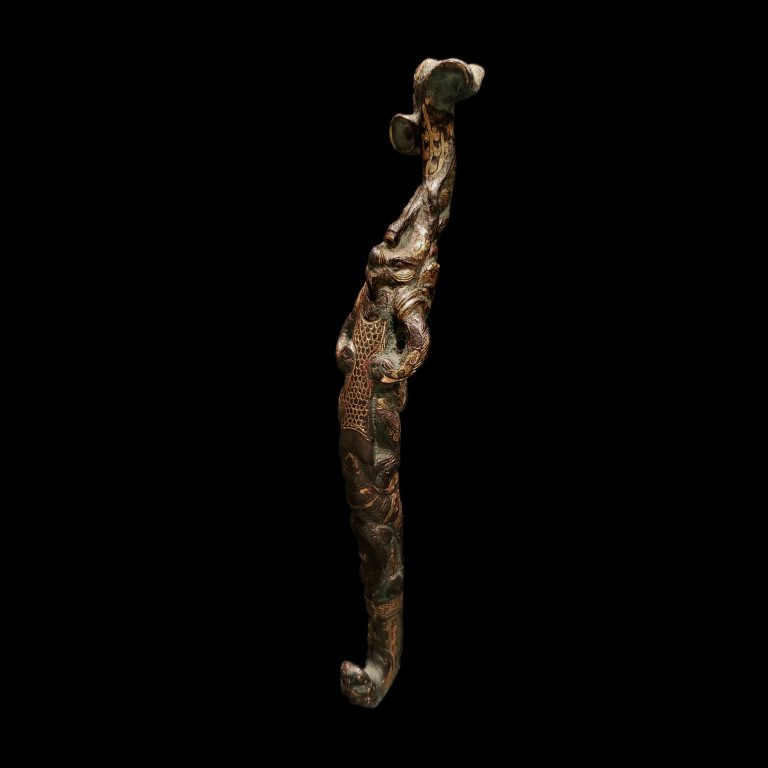 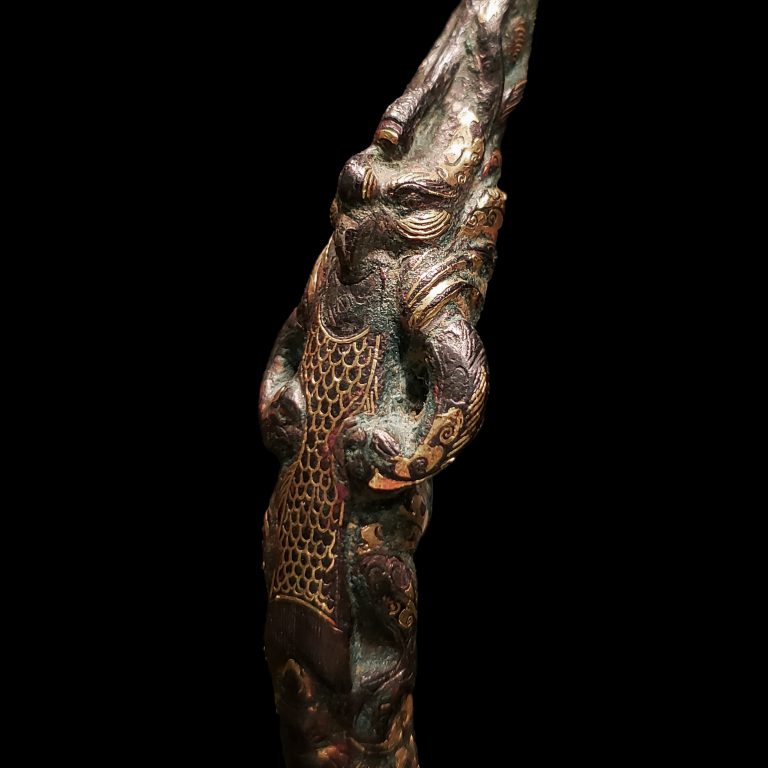 Cast with a central figure of a mythical Bird Headed Dragon beast with three long horns and a short beak seated with front legs and powerful clawed arms positioned akimbo as it devours the large fish held vertically in front of its body, with a dragon-head hook at one end and the bifurcated tail of the dragon at the other end, the button on the underside cast with spiraled scrolls, all inlaid with gold.

Myron and Pauline Falk were an extraordinary couple who formed one of the greatest collections of Chinese art ever assembled outside of China. They were founding members of the China House Gallery at the China Institute in 1949, and they participated in the establishment of the Archives of Chinese Art in 1945, a scholarly journal that continues to be published today by the Asia Society as the Archives of Asian Art. The Falks were among the founders of the Friends of Asian Art at the Brooklyn Museum, as well as the Friends of Far Eastern Art at the Metropolitan Museum of Art.

Their collection of early Chinese bronzes and jade was quite unique. The Falks managed to acquire the classic bronze shapes and designs in an area that has only recently been understood through rich finds and excavations in north China. Their jade collection also highlights recognition of the unusual and rare in this most conservative of Chinese art forms. An inclination toward the sculptural and representational is evident in their selection of archaic jades.

As of this writing, the earliest datable example of a garment hook of this form with a figure grasping a fish was excavated in 1974 from a tomb near Nanjing dating to the late 3rd century Wu Kingdom (80-220 AD) or to the Western Jin Kingdom (265-317). This tomb appeared to have evidence of robbery before the scientific excavation took place. Three couples from different generations, possibly from the same clan were entombed. Although this was considered an unusual custom in the Nanjing region by the archaeologists at the time, many other instances were found in sites located in Wuhan, Henan and Hubei during the early Six Dynasties period. The belthook recovered from this archaeological site is described as having gilt gold on bronze with a similar shape and subject matter to the Falk example. The subject is described by Chinese archaeologists as “a beak headed mythical animal devouring a fish which is strange and exotic.” See Wenwu, 1976:3, p. 57, fig. 3.

A jade belthook of similar design and subject matter most probably from the Eastern Han period is illustrated in Magic, Art and Order, Jade in Chinese Culture, Palm Springs Desert Museum, 1990, pl. 154

Two forcefully modeled agraffes with the theme of a mythical animal with the head of a bird of prey biting the head of a large fish, which it holds in arms with strong claws are illustrated in Chinese Agraffes in Two Swedish Collections by Bernhard Karlgren. Bulletin of the Museum of Far Eastern Antiquities. Stockholm. No. 38, 1966. Pp. 83-192, Plates 66-038 and 039.

Compare a similar garment hook from the collection of Mr. and Mrs. Desmond Gure, illustrated in Mostra d’Arte Cinese/Exhibition of Chinese Art, Venice, 1954, p. 47, no. 120.