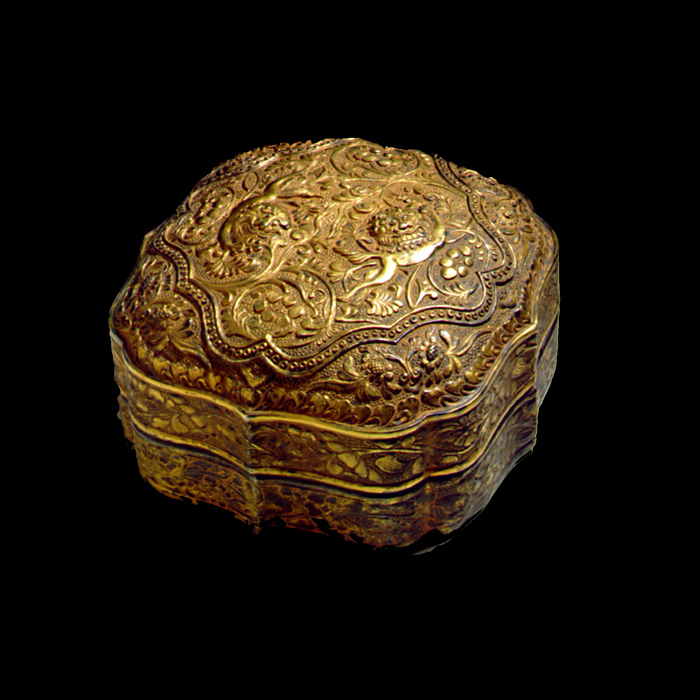 Important ancestral dwellings of the Liao Khitan empire were well furnished with precious objects deemed necessary in the afterlife. Gold and silver containers such as this covered box were placed in the dwelling to hold incense and other offerings. Recent archaeological excavation of an intact tomb of a Prince and Princess of the Chen Kingdom (Qinglongshan, Nainan banner region, Inner Mongolia) has revealed the wealth of the Khitan rulers in an abundance of precious metal objects of Liao manufacture.

Nomadic Khitan tribes controlling northeastern China and Inner Mongolia to the banks of the Liao River were a powerful threat to north China’s borders. In a forced treaty of AD 1004, the Liao were able to exact an annual tribute of silver and silk from the Northern Song (960-1176). Through frequent contact and trade with their Chinese neighbors, the Liao adopted numerous cultural and ritual elements from both the Tang (618-907) and Song (960-1279) empires including systems of agriculture, manufacturing, and administration.

The design of this covered box reflects how Liao artists absorbed Chinese artistic styles and incorporated them to create a unique regional art form specific to the Liao. Prisoners and refugees from China were allowed to settle in the Liao area, and artists were employed by Khitan nobility in their workshops. The influence of sophisticated Tang metalwork techniques inspired the elaborate workmanship of this box. While lions are not native to China, the lion motif on the cover originated during the Tang period as a symbol of valor and energy. The realistic floral designs rendered in high relief emulate concurrent styles of Song period metalwork. In our opinion, the subject matter, workmanship and material suggest a Liao date for this subject.

Note: the reddish deposits occurring on the interior surface indicate that copper was used in the silver alloy, yielding a more malleable material.

The occurrence of the lion in Chinese art is also discussed in Chinese Ornament: The Lotus and the Dragon. Jessica Rawson. London: British Museum, 1984. Pages 110-114.